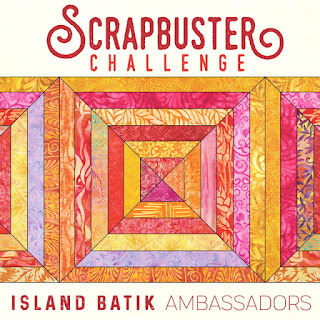 I LOVE scrappy quilts!  It was great to see that this was on the March schedule for an Island Batik Ambassador Challenge.  I knew right away what I wanted to make.  I had seen this pattern October Afternoon by Emily Cross in the September 2017 American Quilter magazine.  I have a spot in my living room where it will fit perfectly.

I also love using up small scraps and the blocks in this quilt are only 1 1/2" x 1 1/2", so this was a good scrap buster!  I pulled all my fall colored fabrics and scraps to see what I could come up with.  I've been an Island Batik Ambassador for seven going on eight years, so I have a great selection of fabrics to work with!  I used at least 10 different creamy fabrics for the background and over 40 different colored fabrics for the leaves.  I love how the scrappy binding gives a little movement to the whole quilt

Here are some of the little cut squares- aren't they cute! 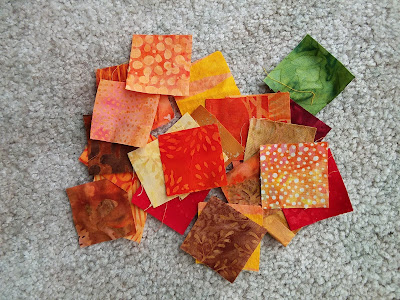 The leaves made sweet little 5" blocks 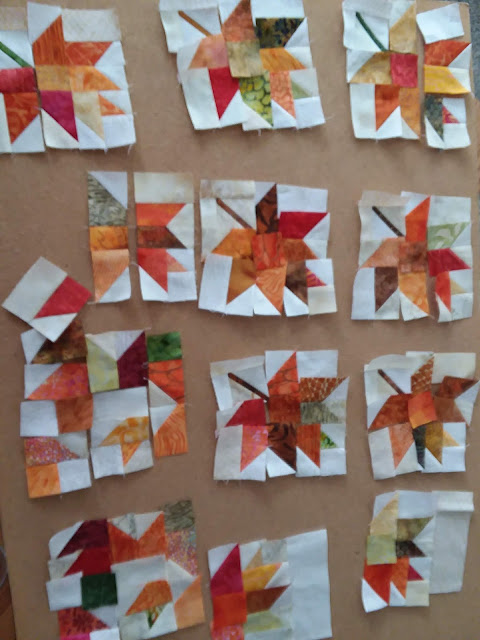 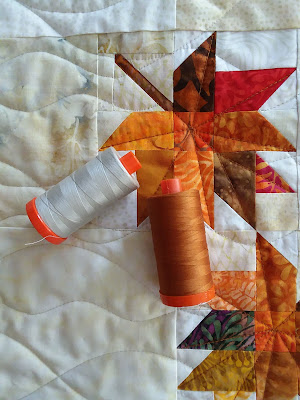 Many thanks to the sponsors Island Batik, Hobbs Batting, Schmetz Needles and Aurifil Thread who supplied product for making this quilt.

Once this quilt was finished I decided to take some time and try to tackle some other fabrics in my drawer of Island Batik Scraps.  I save just about every scrap and they really stack up!  I thought a lot about what to make with them.  I was looking at Bonnie Hunter and her projects using leaders and enders.  Do you know what they are?  They are little pieces of fabric that you sew after you piece something so that you don't have to pull out and clip your thread each time. That way you can always be sewing a couple little pieces together for another project at the same time as you are working on something else.

I decided to cut my small scraps into 1 1/4" squares.  Bingo!  That eliminated a pile of scraps.  Anything under 1 1/4" I threw away.  Believe me - sometimes even that was hard!  Some of those little pieces could be used in applique...

I combined them with white squares. 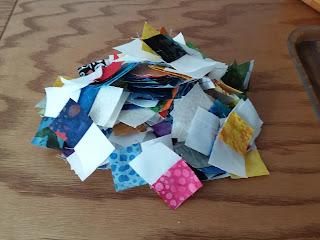 But- what to DO with those little pieced squares? What I did NOT want to do was just create more UFO blocks!  I finally decided I'd make nine patch blocks and sew them together into Irish Chain blocks. 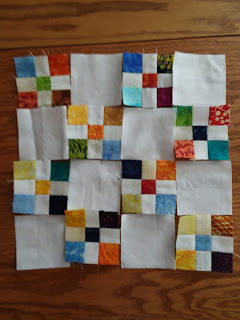 But - I also had a lot of triangle shaped scraps.  It seemed like a shame to cut them into little squares and waste those little end pieces.  So I thought some more.  Bonnie Hunter to the rescue.  She has a pattern with half square triangles and little four patches that I liked.  It looked something like this 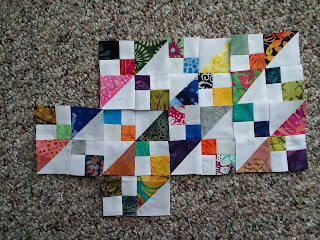 So off I went to make 4 patches instead of 9 patch blocks, and half square triangles with light and darks. This was great as it used up those triangle blocks.  Unfortunately I now have some leftover 9 patch blocks - UFO's never end! 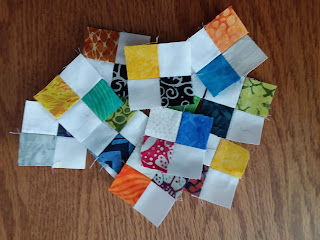 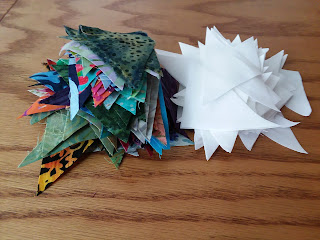 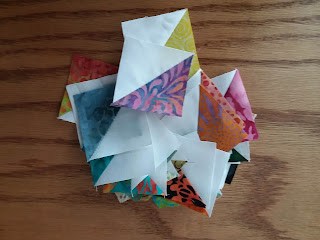 I did run out of white scraps and had to cut into yardage for white, but that's okay.  And I am USING what I cut.

So- I'm making some progress on cutting my scraps (I still have more to cut and each time I do another project I end up with more- sometime I'm going to have to just STOP) and I know what I'm going to do with them.  What I don't know yet is how big a project it will end up being.  That is a little unnerving, but I can live with it - as long as I don't end up with a lot of leftover blocks!

So- I did get a nice number of pieces blocked sewing them as leaders and enders - sewing two little blocks together after piecing another project.  While I was doing this I remembered why I don't really like to do this method!  I've done it before (for a short time), and never really liked it.

The reasons I don't really like to make a quilt this way are:

1.  I don't want to end up with leftover blocks

3.  It's not always easy to grab what pieces you need to put together to sew while you're piecing things for another project.  It's sort of like a mind switch and it takes a tiny bit of time.

4  Sometimes the color thread you are using isn't the greatest

5.  It requires a lot of pressing in between stages

7  You tend to run out of either white or colored blocks.  It's hard to know what you need when you keep cutting and sewing...

I'm not a neat freak, but I do like to keep my projects contained and not mixed up.  I also don't have much room to have so many different piles.  So when I was between projects the other day I decided to just go ahead and sew a bunch of these together. 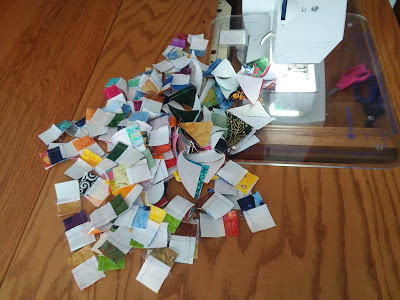 It took me a long time to press these little blocks and put them into their new piles.  I don't know how many blocks they will make and I still have others to piece.  Sometime down the road I'll post a final project.  Wonder when that will be?

So I did go thru and cut up a lot of scraps, but I still have some piles of scrappy strips.  What to do with them?  I have an idea - but it won't be a leader and ender project!  I won't start that project until I get this one done.  I'll probably have more scrappy strips by then...It never ends!

What do you do with your scraps?  I hope you make something beautiful!

Posted by Connie Kauffman at 9:00 AM