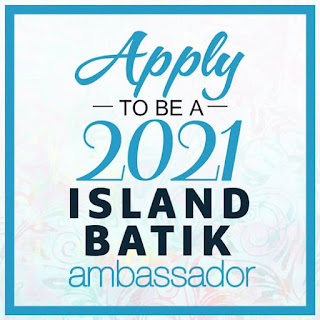 If you have a blog and would be interested in becoming a 2021 Island Batik Ambassador, I encourage you to apply!

Click on the link for more information and the application:  https://forms.gle/WapggDZQEKsmcaZu9

Posted by Connie Kauffman at 9:43 AM No comments: 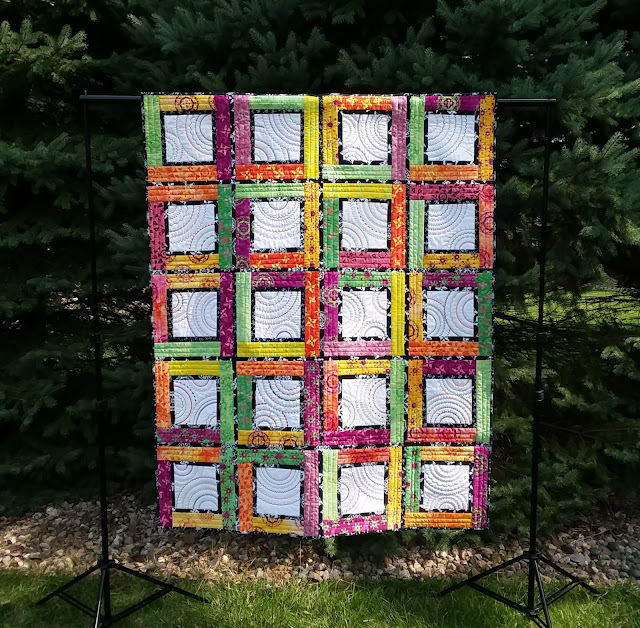 The October Island Batik Ambassador Challenge was to create a thread painted quilt with Island Batik fabrics and Aurifil Threads. 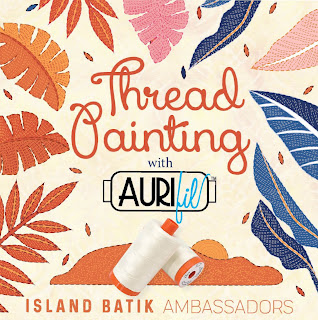 This was an interesting challenge.  I was given the Mandala Magic fabrics designed by Jackie Kunkle of Canton Village Quilt Works to make the project.  These are bright, sort of wild prints and some black and white prints.  These fabrics are the summer 2020 line and are in your stores now. 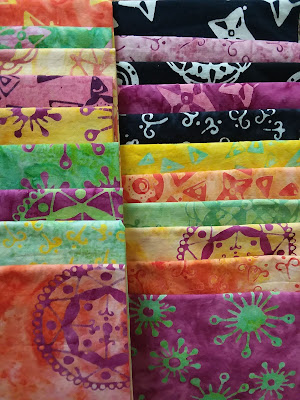 This time we were also allowed to request coordinating threads from Aurifil to make this project.  That was great.  I got 6 colors that went really well.  Aren't they beautiful!  And they are all 60 weight which is my favorite.  I loaded up a bobbin in each color. This was getting exciting! 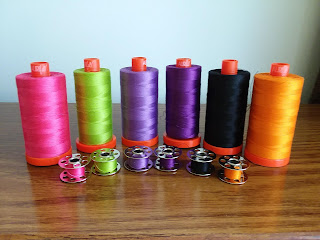 I thought long and hard about what kind of thread painting to do.  I kept going back to doing something like Zentangle with the great colored threads.  Maybe something on white.  I looked at loads of pictures and drew up some of my own. Then I got to thinking about an attachment I'd gotten for my machine many years ago and had only used twice.  It's called the Circular Embroidery Attachment. It makes different sized circles and you can use all the fancy stitches on your machine! 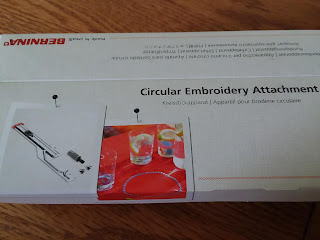 It really is very easy to use.  It attaches with a single screw.  You put the fabric on the pin at the left and the pin can be moved to the right and left to make the size circle you want. 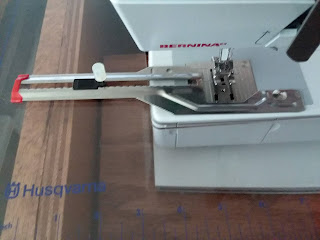 I've mentioned in earlier posts how I love Hobbs Fusible Batting.  I used this batting in the project.
I had to experiment awhile to see how to  make the blocks and what would work.  I made the blocks in the same way you make a Quilt as You Go project.
I took my center white square and cut another square a bit larger for the backing.  I cut the fusible batting as large as the whole block would be after the borders were attached.  I pinned the white block on the front and pinned the other white block in the same place on the back and then pressed them with the iron.  You make the bottom block a bit bigger in case you didn't get it perfectly squared up with the front- ask  me how I know!
The first thing I did was baste around the white block on the top.  This was an important step in that it stabilized the block.  I then had fun sewing circle after circle, after circle!  It was really fun to use the different embroidery stitches.  I must have used about all of them!  I used each of the pretty Aurifil Threads a couple times in each block.  I used Schmetz Chrome Microtex needles that worked very smoothly with all the embroidery. 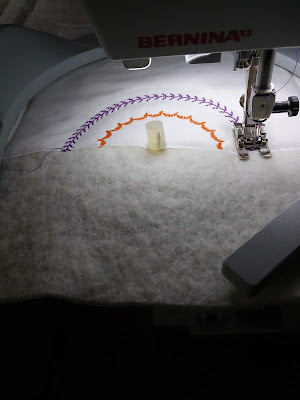 The greatest thing I found out was that the design was the exact same on the back as on the front!  Since I used the fusible batting and had stabilized the block, I didn't need to use any additional stabilizers.  They recommend you use a stabilizer- but I didn't need it.
I only needed to make a wall quilt for this challenge, but with the project being reversible, I couldn't resist making a larger lap quilt.
After I had all of the center blocks sewn, it was time to add the borders.  This was done like a regular Quilt As You Go project.  Lay your border strip on the top and bottom (same color strips) and sew the strips on and press them back - front and back.  With the fusible batting, once pressed it was stable and ready for the next border strip.  I had a small black and white inner border and four bright colors in the outer borders. Very easy!  I did a simple straight line quilting in the border strips. 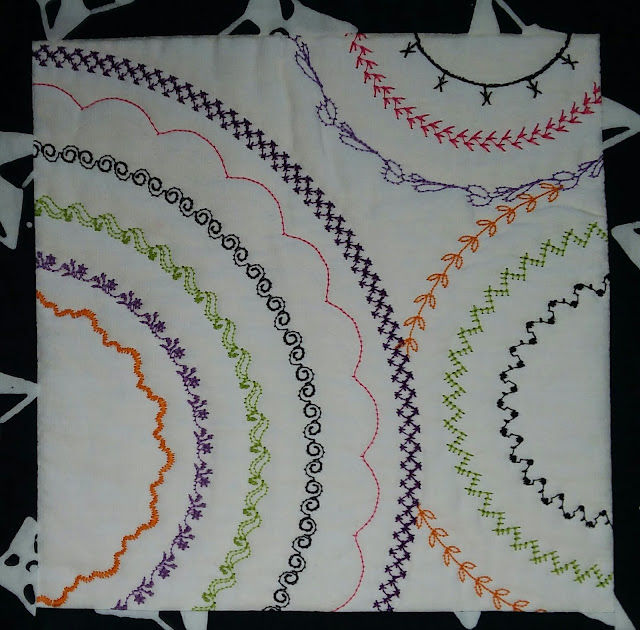 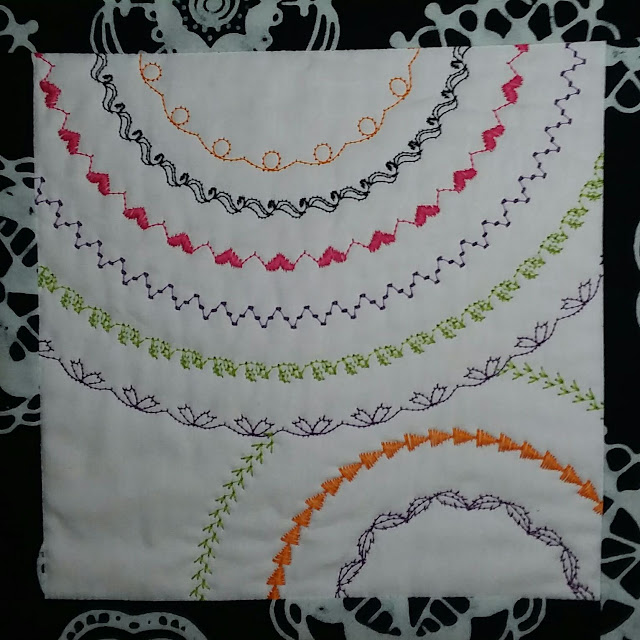 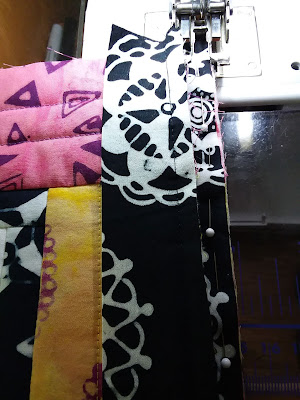 Then the top sashing was pressed back and sewn to the next block.  Then you turn the two blocks over and turn under the sashing and hand stitch it to the other block.  You do this for block after block.  Then do the same thing to join the rows. 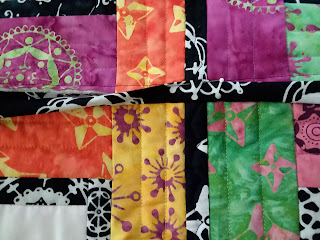 I have to admit there was a lot of hand sewing and many, many, many thread changes in this quilt, but over all it went together pretty quickly.  I did a very simple curved quilting over the small sashing strips to help stabilize the joined battings in the middle.  Then add the binding and it's done!
Pretty neat that it's reversible! 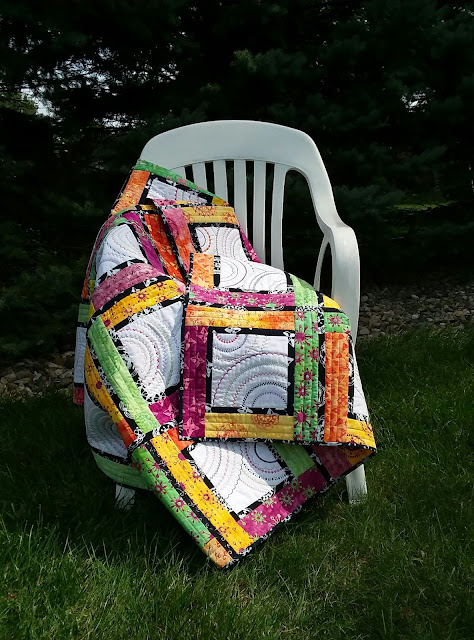 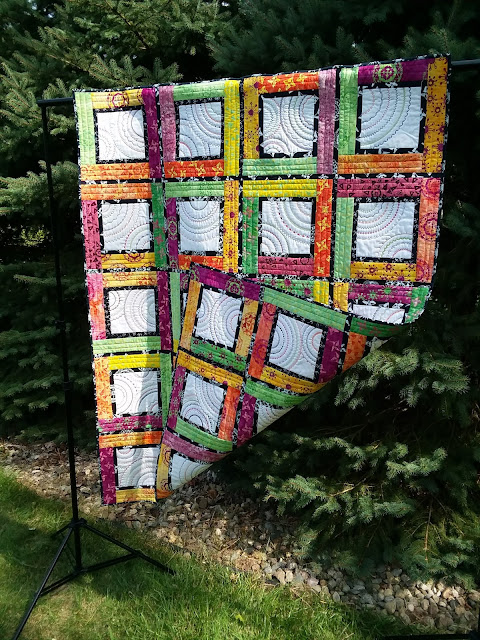 It was interesting that I was given some of the same fabrics for my It's In The Bag Blog Hop.  It looks nice in a bag too! 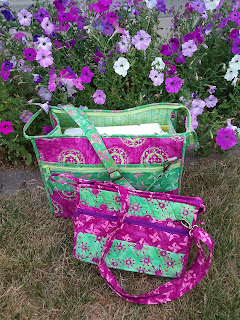 Many thanks to Island Batik, Aurifil Thread, Hobbs Batting and Schmetz needles for suppling the products for this challenge.

The winner from my September drawing for two stash builder bundles was Kathleen.  Congratulations! The fabrics are on the way to you!