The July challenge for the Island Batik Ambassadors is called Artsy Fartsy.  What a name! 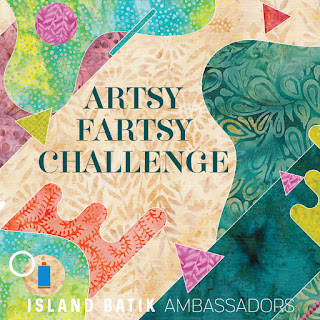 This month we are highlighting Aurifil Threads.  Aurifil is a co- sponser of the Island Batik Ambassador program and sends thread for us to work with in each of our Ambassador boxes.  This challenge was to use at least three different Aurifil Threads in some way in our project.

This years quilt is called Becker Lodge and pays respect to a building that stood many years on the camp property. 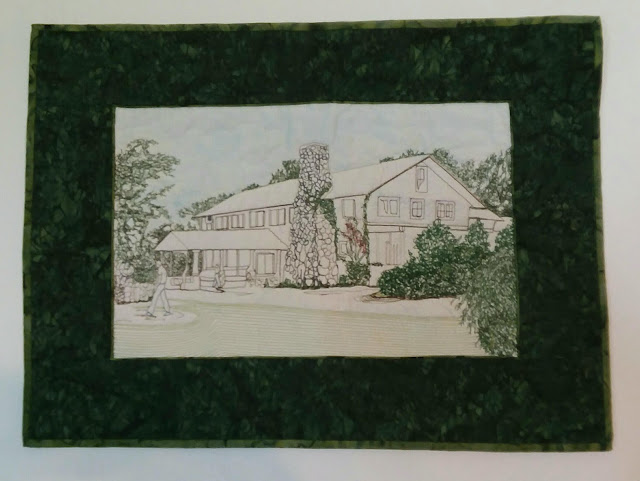 The idea started with a postcard my husband had that he had sent to his mother from Camp in 1965.  I enlarged the photo and thought I would try a project with thread embroidery. 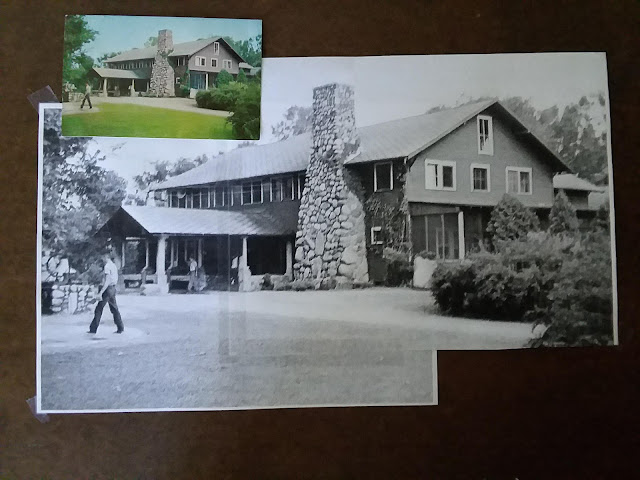 This was a new technique for me and I wasn't exactly sure how to proceed.  I'm not a fan of marking on my quilt tops, but decided to go with the blue water soluble markers.  I traced the major outlines of the building on a piece of Sprinkles Island Batik fabric which is a white fabric with tiny dots.

I wasn't sure what I would use for borders, so I just made the backing and batting larger and would decide that later.  I used Hobbs Thermore batting which is a very thin batting and should work well. 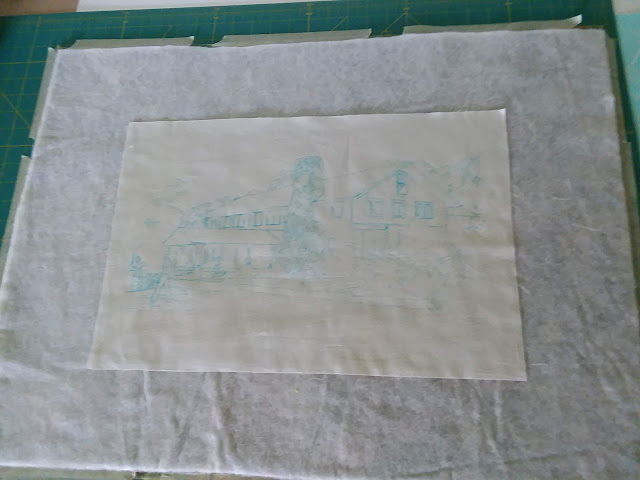 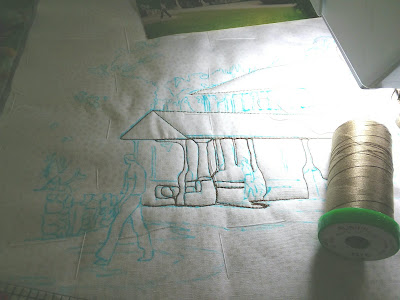 Here you can see I started the thread embroidery with 40 wt Aurifil. 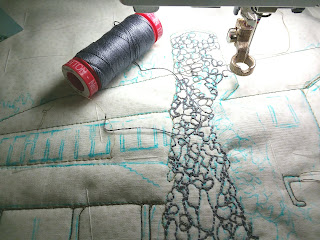 For a slightly heavier look in the stone fireplace I used some 12 wt Aurifil thread. 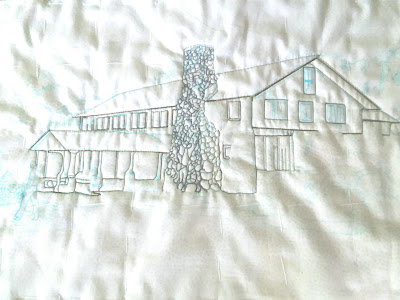 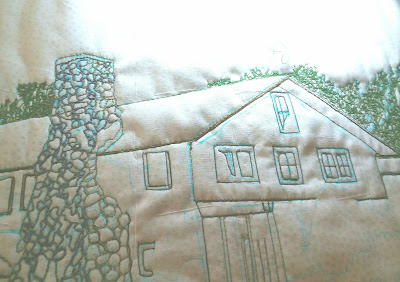 I worked from one area to another adding in some detail.  I first thought about thread painting all the color of the exterior of the building, but decided that would be too heavy and I didn't have the colors I thought would work.  I finally decided to leave the building with just the outline- to somehow give the feel of remembering the building in the spot where it once stood. 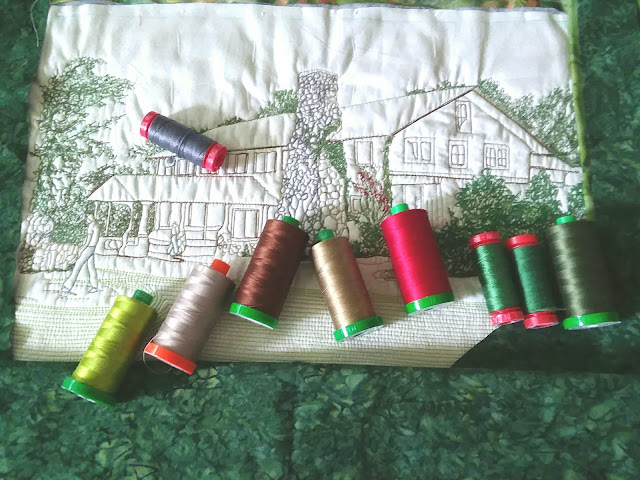 Here are all the threads and colors I used in this project.  I did try a green wool thread which I thought might make the bushes "fluffy", but found it didn't work well in the machine.  What I did then was use the wool and a 40 wt thread at the same time and it worked okay for a small area.

Having never done thread painting I didn't think about using a stabilizer of any kind besides the backing and batting.  It might have been helpful as I had some puckering on the right hand side because of the close quilting in the bushes.  It mainly puckered on the backing behind the border area and didn't show on the front. 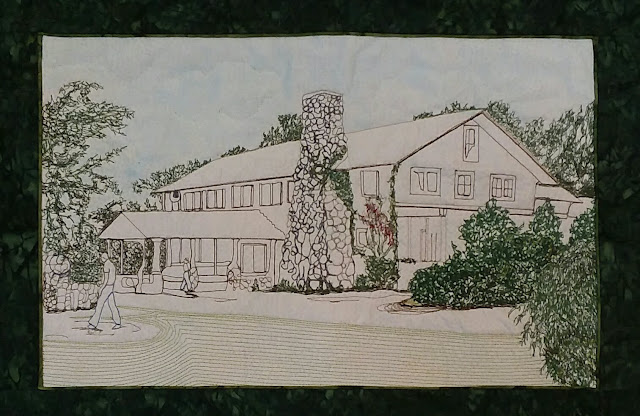 Thanks to Island Batik, Aurifil and Hobbs for supplying the materials for this monthly challenge.

Posted by Connie Kauffman at 9:00 AM 7 comments:

Once again it is "Unboxing Time!"  That's the special time twice a year that Island Batik sends special boxes to their Island Batik Ambassadors.  These boxes are filled to the brim with wonderful fabrics and things for us to work with the rest of the year.

Here's my new box!  Want to see what's inside? 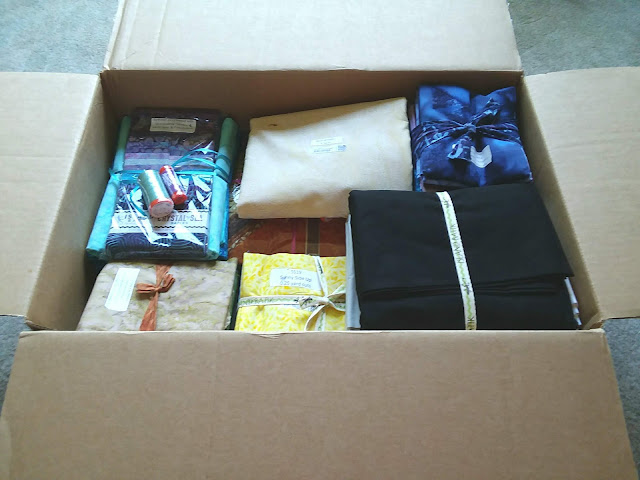 Island Batik has solids in black, white and gray.  They sent generously sent us 4 yards of each.  It's great to have these on hand when we want to use them. 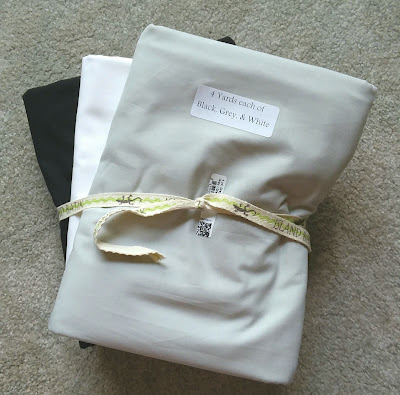 These are bundles of Foundation fabrics- Blenders and basics.  These fabrics blend very well with their different collections and are always available.  These bundles blend especially well with the packaged fabrics they sent this time.

This is a beautiful bundle of 1/4 yd cuts from the Island Batik Sunny Side Up Collection.  It just makes me smile! 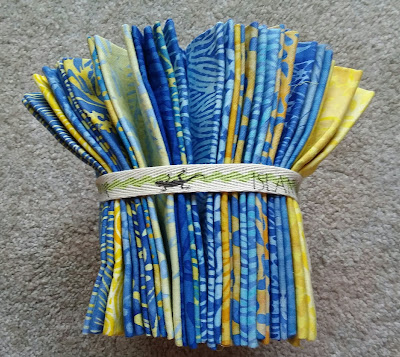 They always include one of their Neutral fabrics as they know we use them a lot.  This generous yardage is called Doughnut. 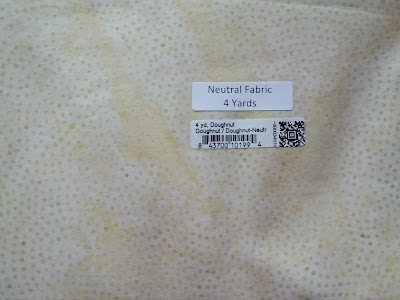 One of my favorite color combinations is in this bundle.  The 2 1/2" strip package is called Crystal Sea.  It came with added yardages in coordinating light and dark blues.  I'm in love!
Aurifil Threads is a partnering company with Island Batiks and sent two lovely threads that compliment this collection. 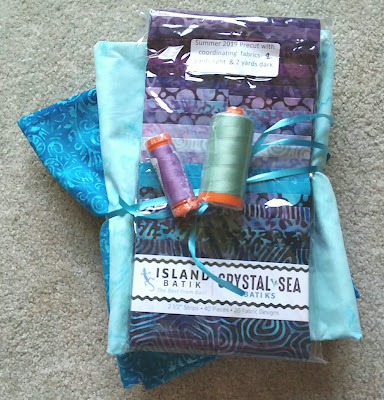 More and more lovely fabrics!  Here is a package of 10" squares from the collection called Soil and Seeds.  Lovely creams, browns and greens for fall.  They again sent coordinating yardage in a light  cream and dark brown.  Aurifil Thread sent great threads to match.  They think of everything! 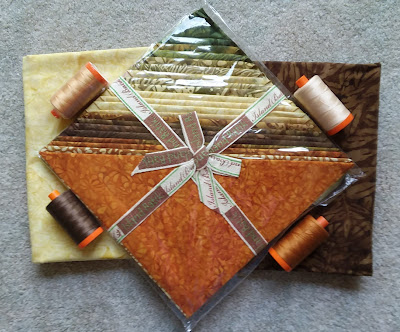 Another participating Industry partner is Accuquilt Go!  This time they sent each Ambassador a new BOB die.  These are dies that contain all the pieces to make the block shown on the cover on one die.  This die is the Ohio Star block.  It makes a 12" block.  You'll see this made up in a blog post later this year. 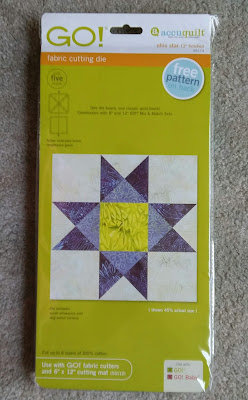 Hobbs batting is another partner and sent us each three different battings to try.  These battings are their Cotton, 100% Wool and Cotton/Wool Blend.  There are so many different battings on the market and it is wonderful to be able to try them out. 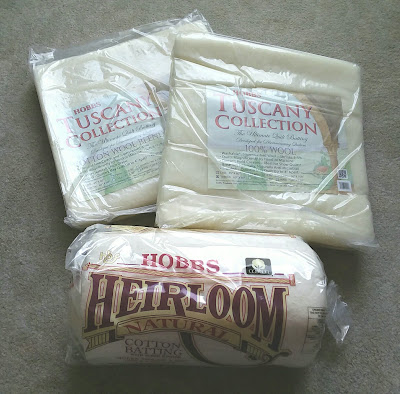 Many, many thanks to Island Batik, Aurifil Threads, Accuquilt Go! and Hobbs Batting for sending these supplies.  Every month a blog  post will highlight a project made with these great products.  I'm excited to get started!

Posted by Connie Kauffman at 9:00 AM 3 comments:

Quilter's World has their Autumn 2019 issue out and it includes my quilt Woven Together.  I used the Sand Bar Collection from Island Batik and Warm 80/20 batting from The Warm Company in the quilt. 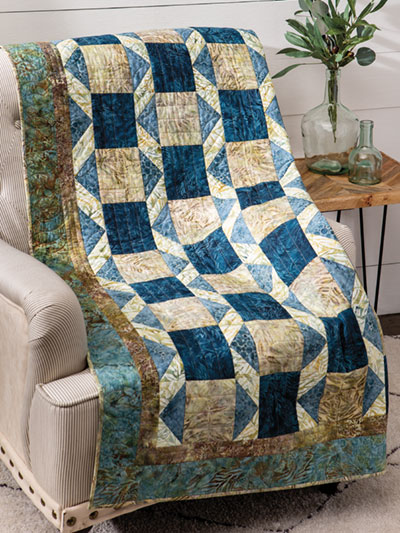