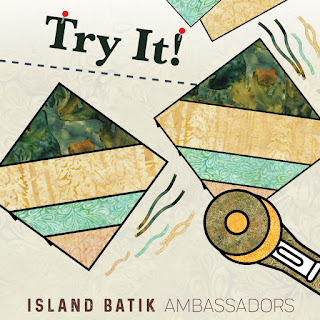 The Island Batik Ambassador challenge for June is to Try Something New.  I pondered this challenge for a long time.  What sounded like fun?  What technique have I not tried yet?

I thought of a few things- some projects really fit in future challenges, so I wanted to wait to do them.  One project I actually started and it turned out much to time consuming and more of a challenge than I ever wanted to do- so I abandoned it...

I finally looked at Pinterest and saw this cute Christmas ornament made with paper and I thought - why couldn't I do something similar with fabric?

Here is my creation with a couple variations. 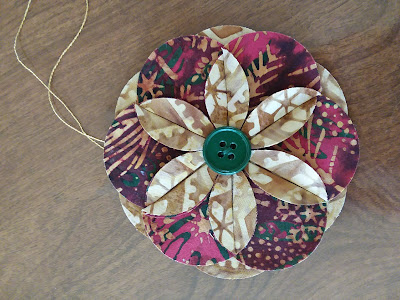 I made the ornament by fusing fabric to both sides of some fusible webbing and then cutting out with the Accuquilt Circle Die.  I used a different fabric for each side and cut out  12 small circles.  I also fused fabric to one side of fusible webbing and cut out one larger circle and one larger circle of a two sided fusible by itself.  Each small circle has two sides folded in and pressed with an iron.  They didn't press completely flat, but that is okay as it makes it more 3 dimensional.

The 6 folded circles are laid onto the larger circle with the fusible side facing up.  There is a gap in the center, but the sides all touch and then are pressed to the fusible.  The gap is covered by the button later.

I actually made two flower ornaments- using the other 6 circles and fusing them to the fusible web circle just like the first one.  Then I fused both ornaments together so that the ornament looks the same on the front and the back.

It's easy to slip the hanging string between the two ornaments when they are fused together (if you don't forget!)

Sew a button on each side thru the middle and the ornament is done!  These were fun and I ended up making 6 of them.  I used Island Batik Winter/Christmas fabrics, but they would be pretty made with any colors.  They ended up about 4 1/4" diameter. 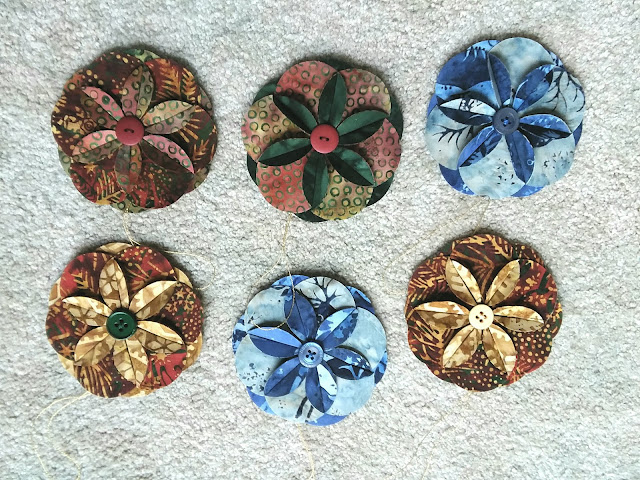 (Can you see the mistake I made on one?  I folded the wrong side in on one circle and didn't realize it until I had fused it....)

I thought I would take an outside picture, but it was a challenge with the wind! 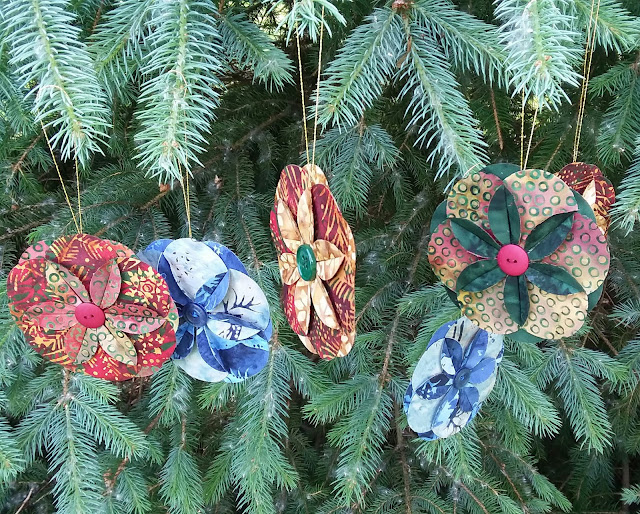 And no- it's not snow on the branches in June, (although that would be appropriate for the ornaments), it is cottonwood from a neighbors tree.

Of course once I made these I kept thinking of other new things to try...  I saw another idea on Pinterest and realized I'd never sewn anything with vinyl.  Those little bags are sweet and would be nice for gifts too.  I decided to give it a try. 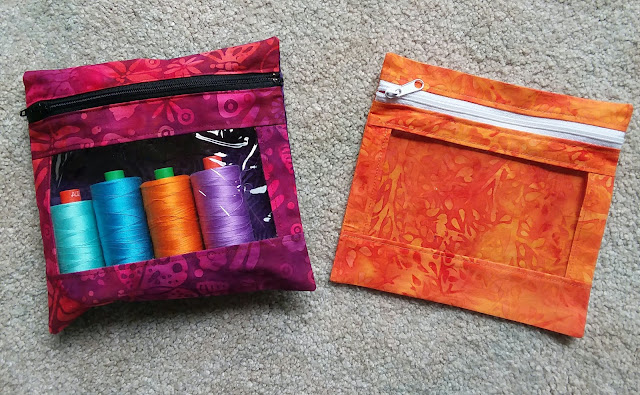 I used a couple leftover pieces from a layer cake of Island Batik Moroccan Bazaar.  I didn't have any purchased vinyl on hand, so I improvised by cutting up a bag that sheets had come in.  After I had those pieces cut, then I made the measurements for the rest of the bag to fit around them.  I had a couple zippers in my stash and I was ready to go!  The little pouches ended up 6 1/2" x 7".

Isn't it great to see the beautiful Aurifil Thread thru the little window!  You'll always know what is stored in your little bags this way!

The sewing was quick and very easy.  I did put paper under the vinyl when sewing so it didn't stick to the sewing machine and it worked great and was easy to remove.

I will be making more of these in the future!

Posted by Connie Kauffman at 10:35 AM